Altar to Sant'Antonio in the Frari


Of the seventeen monumental altars in the majestic Basilica of Santa Maria Gloriosa dei Frari, the first in the right aisle of the church is dedicated to Saint Anthony of Padua, and in 1998 it was scheduled for ordinary maintenance attention. But as soon as the experts set hands on it they realized that much more radical action was needed to solve serious structural problems. The parish did not have sufficient resources to meet the considerable increase in costs and was unable in the short term to find extra funds. So our Foundation stepped in and offered to supplement the money available so that the urgent work could be completed by the end of the year. Indeed, given that two architects from Ticino were involved in the original construction of the monument it would have been wholly unreasonable for us to have refused an opportunity that so perfectly corresponded to the Foundation’s policy of concentrating its support on the conservation of works by artists born in or closely associated with our national territory. 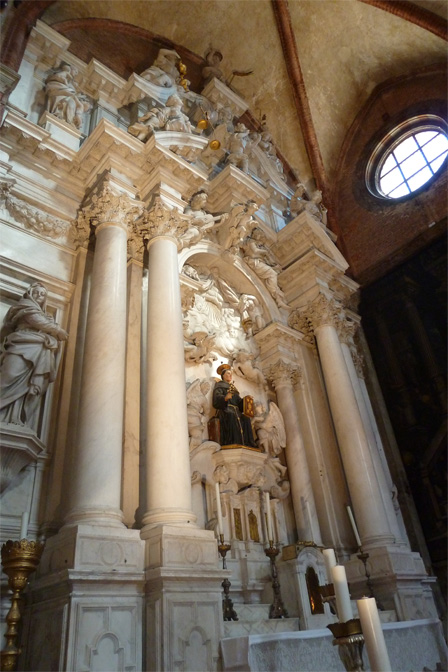 Historical sources confirm that there was already an ALTAR TO SANT’ANTONIO in the same position in the mid-1400s, built there when the lay confraternity (or Scuola) dedicated to the saint was given permission to transfer its headquarters to the Frari and to celebrate its services there; it is probable that, like other artefacts in the church, it was at least partly made of wood. In 1663, the confraternity – one of the many minor devotional guilds operating in Venice, but without doubt one of those that attracted the greatest respect and loyalty amongst the citizenry – decided to replace the wooden altar with the present stone one. They commissioned one of the most famous Venetian architects of the day for the task, the omnipresent Baldassare Longhena (1596/97-1682), now best known for the architectural and urban planning masterpiece, the Church of Santa Maria della Salute. A contemporary report, however, attributes the altar to another prominent architect, Giuseppe Sardi (1624-1699), who was born in Venice but whose family came from Morcote, a village on the shore of Lake Lugano.

Recent studies have overcome the apparent contradiction with the simple revelation that Longhena’s services were so much in demand at the time and that he was working on so many projects that his involvement was often limited to the planning stage; also, given that the two men got on well together, it is not unreasonable to suppose that Sardi was appointed to put Longhena’s plans into practice in what we might now call a sort of joint venture.

The sculptural decoration of the altar was also carried out by two artists (no doubt assisted by other workshop sculptors): the Flemish Just (Giusto) Le Court (1627-1679), who started working in Venice in around 1655, and Bernardo Falconi from Ticino (Rovio ca.1630 - Bissone ca.1696), whose activities in Venice did not stop him frequently accepting commissions in various other Italian cities. The carved initials BFF show that Falconi was certainly responsible for the statues representing the cardinal virtues: Faith and Hope, the outer figures in the lower register, and Charity standing on the first cornice on the left.

The monument, an imposing example of Baroque magniloquence, has a very complex architectural structure and iconographic design. Sturdy composite columns, allegories of the Virtues, putti, angel musicians, the resurrected Redeemer, festoons, scrolls and arches form a plethora of marble and gilding framing an antique wooden statue of the humble Franciscan saint who, to judge from his fixed stare seems to have turned his back on all this magnificent ostentation.

Bernardo Falconi’s best known work is without doubt the statue of Fortune that crowns the watch-tower of the Dogana da Mar, turning with the wind on a gilded globe supported by two Atlas figures.