In 1997 the Foundation financed the restoration of the second altar against the right side wall of the Church of San Sebastiano in Dorsoduro. The altar dates from the mid-XVI century and, as an inscription on the wall notes, was commissioned by the famous orator and jurist Melio da Cortona in memory of an ancestor of the same name who was a heroic commander of the Venetian infantry who died from a wound sustained in battle against the army of Ferrara.

The most important feature of the altar is a marble sculpture of the MADONNA AND CHILD WITH THE YOUNG SAINT JOHN by Tommaso Lombardo. Though the sculptor is also known as Tommaso da Lugano, we have no precise information about where he came from or his dates of birth or death, only that he was in Venice between 1536 and 1567.

The names by which he is mentioned suggest that he was probably a native of Ticino, but it is almost certain that he was not related to the Lomabardo family from Carona, though they too were sculptors and stonecutters who were active in the city in the same period. In his biography of Jacopo Sansovino, Vasari (1511-1574) mentions Tommaso as one of Jacopo’s many pupils and followers, and reports that “along with others, he carved many of the very fine statues in the Biblioteca Marciana: and later, when he had left the Sansovino bottega, he sculpted a group of the Madonna and Child with the young St. John the Baptist, all three of such beautiful form, posture and style that they bear comparison with any modern statue in Venice. The group is in the Church of San Bastiano”. Sansovino’s son, Francesco, “a good-hearted man of letters and of the law”, also mentions the sculpture in his VENETIA CITTÀ NOBILISSIMA ET SINGOLARE and describes it as a statue “on the second (altar), … a marble Madonna sculpted by Tomaso Lombardo, modelled on Sansovino’s Virgin on the Loggetta in St. Mark’s Square”.

The sculpture is often mentioned in works of art history and tourist guides, but almost always with reservations that compare it unfavourably with the Sansovino statue that inspired it. And neither has Lombardo’s St. Jerome in the Church of San Salvador, the only other surviving sculpture attributed to him with certainty, enjoyed much greater appreciation.

Though critics have always acknowledged his more than passable technical skill, Lombardo’s artistic merits would seem usually to have been judged in inverse proportion to his fame, which seems to derive mainly from his many years as an assistant to such a renowned maestro. It is difficult to believe, however, that it was only deference to Sansovino that led Vasari to comment that a now lost bust of Charles V by Lombardo was much admired by the emperor himself. And a marble Christ, another work that no longer survives, aroused similar acclaim in the Church of Santa Giustina (now partly demolished and used as a school building).

Tastes and the criteria of critical judgement have evidently changed since then, and perhaps Tommaso’s professional qualities found better expression in a different sphere. Indeed Vasari himself tells us that he “was more at home working with plaster than with marble or bronze” and “he created a large number of exquisitely beautiful figures in this material, many of which adorn the houses of various gentlemen”. Unfortunately, however, we have no direct evidence of this side of his activity, though we cannot exclude the possibility that further research in this direction might eventually lead to surprising discoveries. 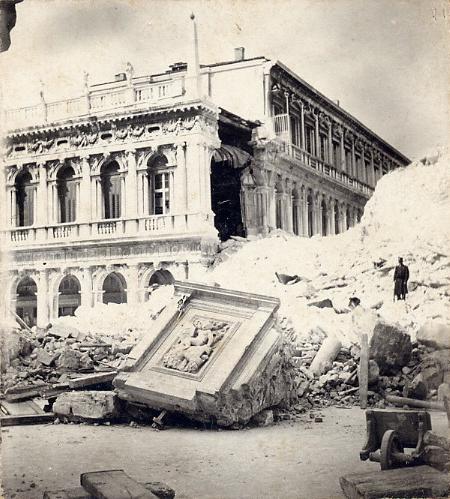 The statue in gilded terracotta that served as the model for Tommaso Lombardo’s work in San Sebastiano was seriously damaged along with the Loggetta that housed it by the sudden collapse of the campanile in St. Mark’s Square on 14th July 1902. The shattered work was painstakingly reassembled but it proved impossible to reconstruct the figure of the young St. John the Baptist, so the group now in the Museum of the Basilica is obviously incomplete in that the gesture of the Madonna’s hand no longer has any point.