For over a century, the PROTESTANT SECTION OF THE CIVIC CEMETERY, the "Reparto Evangelico", has been the final resting place of famous foreign guests of Venice; the many nationalities represented include British, German, Swiss, Swedish, Dutch, American, French, Danish, Russian, Austrian, Italian, … and the deceased include consuls (four of them Swiss), admirals and writers, as well as ordinary citizens. 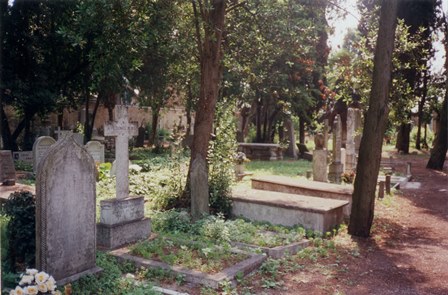 Given its historical value, the cemetery, which is owned by Venice City Council, is a listed property. After numerous changes of position and layout, this particular part of the Civic Cemetery on the Island of San Michele has been used for Protestant burials since 1895. The documented presence of Protestants in Venice, however, goes back much further, to 1650 when there is evidence of a Protestant community with its own pastor and meeting-hall.

Initially, the parish of San Bartolomeo was responsible for Protestant burials, but in 1719, with the procedure arousing increasing opposition, the German community asked for a cemetery of its own to be created on one of the islands in the Lagoon.

They were granted a plot of land on the Island of San Cristoforo and with successive enlargements this was used until 1810, when Napoleon ordered the closure of all churchyard cemeteries in Venice and the creation of a central burial ground on San Cristoforo. 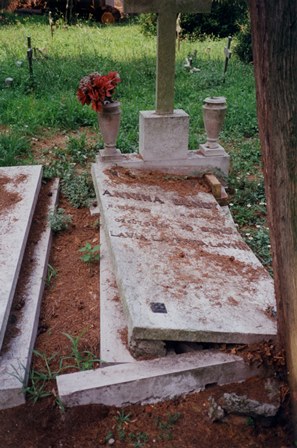 The Protestant Cemetery was moved to make way for work on the new civic burial ground and within a couple of decades the decision was taken to expand the area to include the adjacent Island of San Michele. The work finished in 1839, but in 1895, further new work caused the Reparto Evangelico to be moved to its present position (Area XV).

The Protestant Cemetery occupies an almost square area (about 50 x 56 metres) to the east of the monastery. It is surrounded on all four sides by a brick wall, with access via an iron gate linking it with the Catholic Cemetery or another entrance in the opposite wall, which formerly gave access directly from the Lagoon.

Most of the graves are marked by tombstones in the four internal sectors, while others lie against the four brick walls. There are many tall trees, including cypresses and bays, scattered amongst the graves and they help give the cemetery a memorably evocative atmosphere. The reparto contains just one funerary chapel, its three arches set into the southern wall, enclosing the remains of a family of Italian Protestants.

The clear layout of the cemetery is now difficult to discern, however, with rampant low-growing vegetation covering many graves, opening cracks and making it difficult to read many of the inscriptions. At the same time, the uncontrolled growth of tall trees has disturbed and broken many tombstones. Tilting and shattered crosses, tombs invaded by tree roots and falling apart, sagging fences and the odd act of simple vandalism together create a sense of abandonment. And this can be aggravated by the violence of the storms that sometimes strike the Lagoon, uprooting trees.

In 2003, the Swiss Pro Venezia Foundation, together with other Private Committees for the Safeguarding of Venice such as Venice in Peril and the Danish, Austrian and Swedish Committees, financed a detailed survey of the reparto, a photographic catalogue of all the tombs and a rough estimate of the investment needed to address the situation.

In an effort to accelerate the action and focus on the specific problems of the Protestant section, a small group of individuals and the three Protestant communities in Venice (the Lutheran, Anglican and Waldensian Churches) formed a non-profit association (ARECSM) in 2012; and in 2015 a US-based 501 (c) charity was created to support the local efforts. The association has already commissioned a series of scientific investigations and formulated a draft restoration project. It is now seeking finance to pursue various forms of concrete action. If you would like further information or to help in any way, please contact ARECSM, Palazzo Cavagnis, Castello 5100, Venice 30122.