Vistors exploring Venice will sooner or later come to the lively Campo S. Margherita and as they leave the square are sure to be intrigued by the side entrance to the Church of S. Maria del Carmelo (commonly known as the Carmini). The entrance is covered by a stone and brick porch called a protiro, a surprisingly bold construction decorated with friezes and patere depicting a fascinating bestiary. A few steps further takes one to the front of the church and a quite different register, a sober, Codussi-inspired, open-brick façade that was once plastered, its decoration limited to a rose window, five statues crowning the cornice and the monumental, apparently Renaissance entrance. This portal (in Istrian stone and comprising two semi-columns and corner pilasters of an elegant Ionic order on tall bases, supporting a dentilled entablature and a fascia in red marble – the only example of different colour or material in the whole – and a niche with a split tympanum) has a full-relief statue of the Madonna and Child at the centre, surmounted by a vase (though there were once three statues at the top of the entrance, and the statue of the Madonna is not in its original position).

One of the architects thought to have been responsible for the façade was Sebastiano Mariani da Lugano and, until recently, he was also credited with designing the monumental entrance. Indeed, his was the name attached to the restoration proposal on the list that the Superintendency for the Architectural and Landscape Heritage of Venice and its Lagoon presents every year to the Association of Private Committees for the Safeguarding of Venice in the framework of the Joint Programme run by UNESCO and the Association. 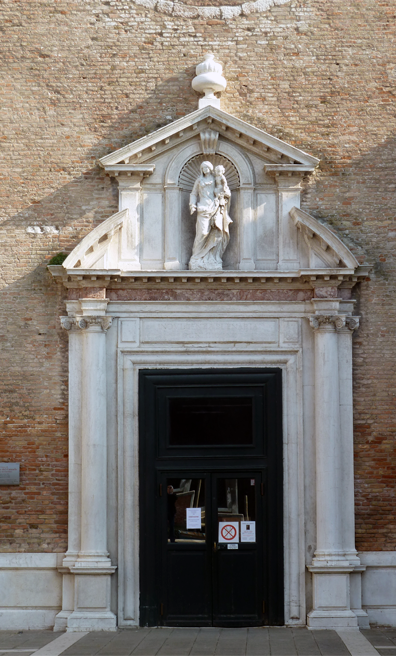 This – the opportunity to focus on the work of an artist from the region of the Lakes - was the situation that attracted our Foundation to the project; we assumed that the historical and archival research that always precedes such restoration operations (and to which the Foundation attaches great importance) would increase our knowledge of Mariani da Lugano, a little-known fellow countryman whose interesting work in Venice is unfortunately not all well conserved either. One of the reasons for the paucity of reliable information is the confusion surrounding artists of the same name, an aspect explored in one of the chapters of the study Arte & Storia - Svizzeri a Venezia. As things turned out, it was precisely the phase of preliminary study, in particular the archaeological survey and stylistic comparisons, that made it clear that Mariani was not responsible for the portal: it is indeed classical in style, as mentioned earlier, but was added to the façade about a century after it was rebuilt, probably in the first decade of the XVI century. The study edited by Emanuela Zucchetta, the art historian of the Superintendency, published by Il Prato and financed by the Swiss Pro Venezia Foundation (Il portale della chiesa di Santa Maria del Carmelo a Venezia. Ipotesi costruttive e interventi di restauro) reveals the new dating of the portal and a new possible attribution, unfortunately not yet supported by documentary evidence. The suggestion now is that the entrance was designed by Francesco Contini, a member of a large family (also from Lugano), who was active in this period both in the Church of the Carmini (the Foscarini monument) and in the nearby Church of the Angelo Raffaele. So our Foundation still had the satisfaction of making yet another contribution to historical knowledge of the work of artists from Ticino in Venice.

The new attribution and dating of the portal were rewarding initial results, but the fundamental importance of the project lay in its conservation. It is true that the entrance was not suffering from very serious structural or other problems but featured a whole series of the typical signs of decay that affect stone elements exposed to the harsh conditions of the Venetian environment and from human neglect and misuse (graffiti). Indeed, the situation was such that the Foundation decided to extend action to the base of the doorway and to the two side windows, also in Istrian stone, so that when finished, the restoration would constitute a more harmonious unit in the context of the façade as a whole.

But our interest in this particular project also lay in the possibility, given the condition of the portal and the types of decay it featured, that the work needed could be carried out by trainee restoration students. Our Foundation proposed that it should become a joint operation involving both Venetian and Swiss institutions and the Superintendency duly approved the collaboration between the Istituto Veneto per i Beni Culturali (IVBC) and the Conservation and Restoration Course of the Scuola universitaria professionale della Svizzera italiana (SUPSI) of Lugano. And this unforgettable training and human experience for both students and teaching staff has borne lasting results, with contacts between the two institutes still continuing. The volume dedicated to the restoration of the portal gives a full account of this interesting practical teaching experiment, as well as details of the analysis of the decay and the operations undertaken to combat it.

Not everything, however, could be entrusted to the care and dedication of the young restorers: the Superintendency thought it better to deal with the deep fissures in the texture of the open brickwork, which had evidently been repaired and patched so many times that the lower part of the façade was now far from homogeneous, by employing a specialist firm to carry out targeted scuci-cuci operations using old salvaged bricks. This delicate process, which was followed directly by the Superintendency, also receives a detailed description in the published report, financed by the Foundation.

Finally we should mention how the presence of the trainee restorers on the outside of the church aided the process of attending to another restoration inside the same church. This was the tomb of Giuseppe Sardi, the famous architect from Morcote who became one of the foremost figures in Venetian Baroque and had close connections with the Church of the Carmini. The restoration was carried out by one of the IVBC’s staff instructors.