Far from the most crowded tourist routes in Venice, half way along a canal that leads to the northern edge of the city, stands the Church of San Lazzaro dei Mendicanti. The church is easy to miss because its façade forms part of the outer wall of the city’s main hospital, but a surprise awaits anyone who has the patience to find and enter it: the funeral monument to Alvise Mocenigo, an early work by Giuseppe Sardi (1624-1699), the renowned architect whose family came from Morcote.

The variety of the marbles used and the exhuberance of design and detail, the unusual iconographic programme and its considerable size make the monument one of the masterpieces of Venetian Baroque.

But the distinctive conditions of the Venetian environment, with its high percentage of saline moisture and atmospheric pollutants, had placed the XVII century marble under considerable stress, covering it with a tenacious layer of dirt, which corrodes and blurs the edges of the patiently and expertly executed relief carving, and can penetrate the marble, reducing it to powder and causing pieces to fall. 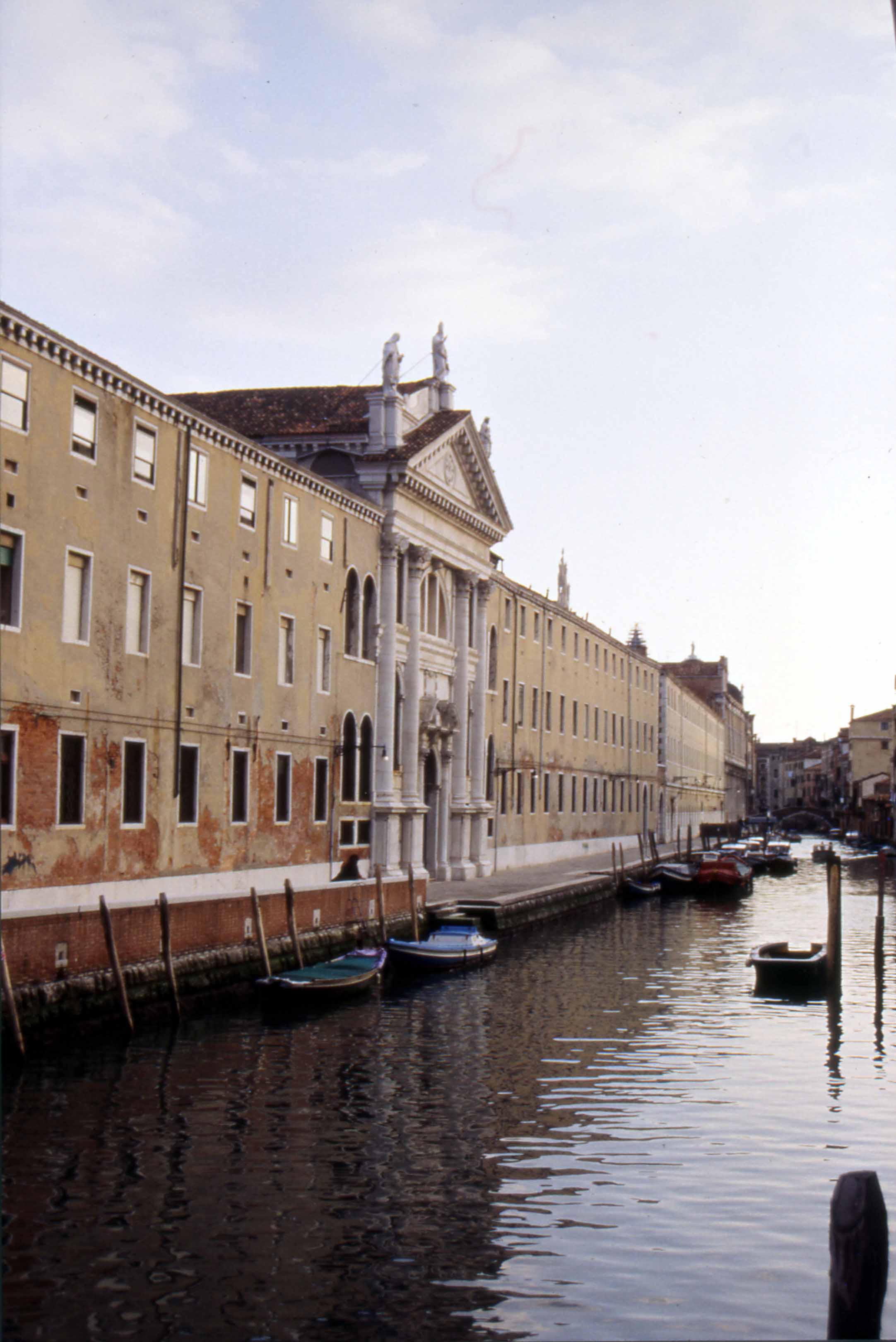 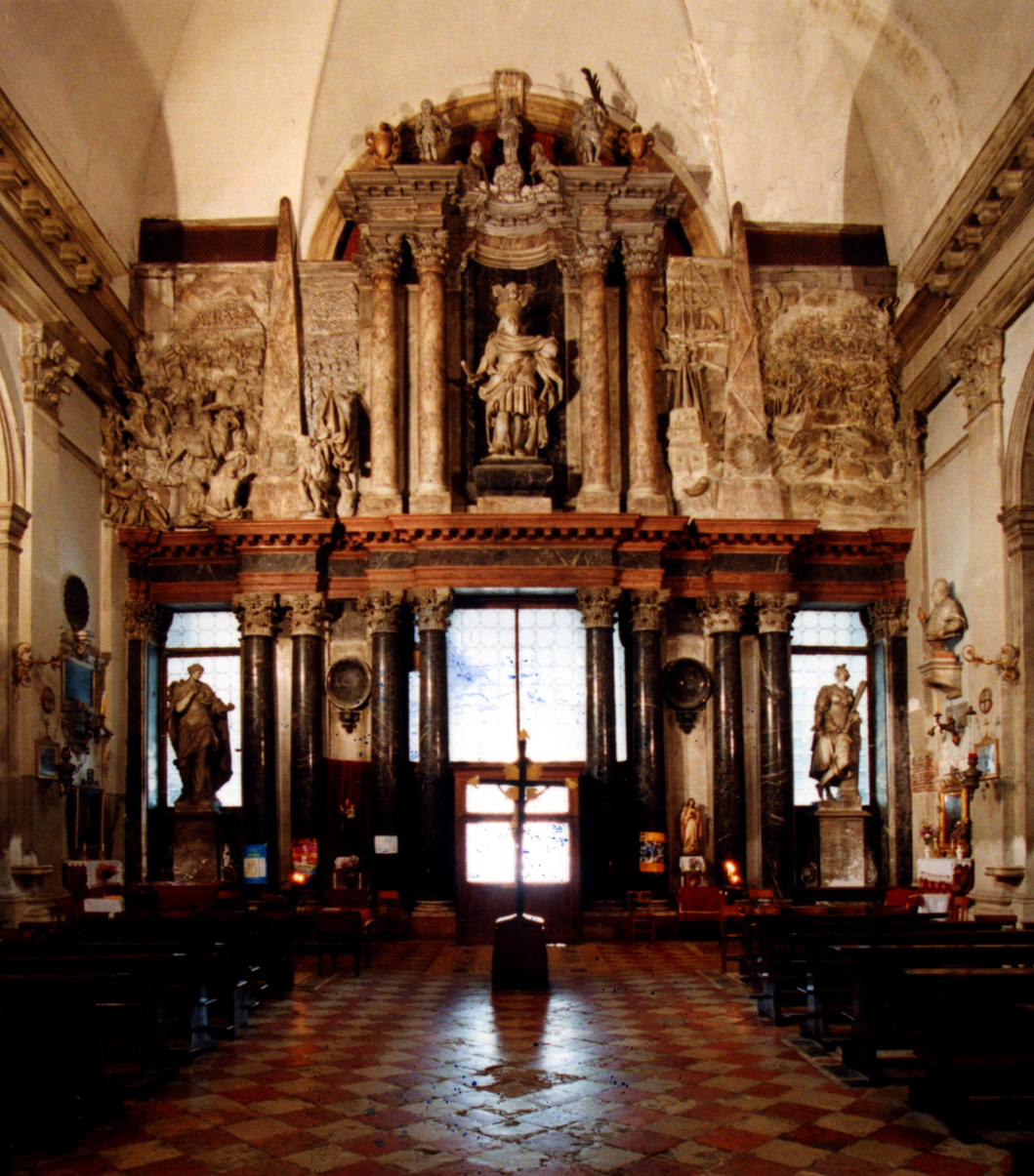 The Swiss Pro Venezia Foundation responded immediately to the alarm raised by the Superintendency of Venice and we started by financing the indispensible diagnostic and archival investigations in order to determine the monument’s state of conservation. This preliminary phase was followed by the actual restoration, coordinated by the UNESCO Venice Office, which was completed in 2004. The various operations are described below:

The analyses revealed a marked, deep-seated presence of salts (chlorides), which the church’s heating system had caused to crystalize, with the result, especially in the lower part of the monument, that marble was turning to dust and pieces were becoming detached. By contrast, the façade giving onto the atrium proved to be covered with a thick and tenacious layer of pollutant deposit and of pigeon excrement, both of which have a very corrosive effect.

Who was Alvise Mocenigo and why was Giuseppe Sardi chosen as the architect?

Tommaso Luigi (Alvise in Venetian) Mocenigo (1583-1654) belonged to an ancient Venetian patrician family, seven of whose members became Doges and many others served as Ambassadors and Procuratori di San Marco (heads of government departments). Alvise was not only a Procuratore but also held one of the most prestigious positions in the Republic as Capitano Generale da Mar (in effect the admiral of the Venetian fleet). He was a leading figure in the first phase of the War of Candia (the present-day island of Crete), from 1648 to 1651, defending the Venetian strongholds in the Eastern Mediterranean against the attacks of the Turks.

Some months before his death Alvise Mocenigo made a will in which he expressed a desire to have a monument « … in which the memory of a man who had served the Most Serene Republic should be an inspiration to those who came after to do likewise … » In 1657, the executors of the will obtained permission from the Confraternity of the Ospedale dei Mendicanti to erect the monument to Alvise in the Church of San Lazzaro and appointed Giuseppe Sardi to design it. Why Sardi? In 1657, Sardi was just 33 years old but he must certainly have qualified as a “maestro di bottega” given that in the same year he was elected “gastaldo” or chief official of the Guild of Stonecutters and Architects and had begun work on the monument to Cavazza in the Church of Madonna dell’Orto.

Giuseppe rose confidently to the challenge of this new appointment and designed a work that responded superbly to the wishes of Alvise and to the importance of the Mocenigo family.

Skilfully exploiting the double face of the wall that divides the church from the atrium, Sardi evokes the prestige of Alvise’s position as Capitano da Mar by using the motif of the triumphal arch with three openings, an obviously celebratory design which honours its subject’s civic and moral virtues; he also solves the problem of the natural illumination of the church with the two side openings in the façade compared with the previous one.

All the statuary and relief work on the monument are in Carrara marble, while the majestic columns in verde antico marble (often used in funerary monuments because of its dark colour) perform the task of dividing the two faces of the façade into “narrative scenes”.

On the side facing the atrium are bas-reliefs depicting fortresses on the island of Candia, and commemorative inscriptions supported by lion-heads recall the glorious exploits of Mocenigo, while the side facing the interior of the church has statues of Virtues (Strength and Prudence) and of the Capitano da Mar, in solemn pose on his funerary urn. Together they evoke Mocenigo’s dignity and valour and his victories in two famous battles (one on land and the other at sea), which are carved in high relief with an almost pictorial wealth of detail and, unique in Venice, constitute the most remarkable feature of the whole composition.

Such was the success enjoyed by the monument that twenty years later, 1678, another Capitano da Mar, the Venetian nobleman Antonio Barbaro, commissioned Sardi, by now an established architect, to create a funerary monument for him on the model of the one for Mocenigo. In this case, Sardi was given the entire external façade of a church to play with, that of S. Maria del Giglio, which the Swiss Pro Venezia Foundation helped to restore in 1996.