Before the great retrospective that the Art Museum in Mendrisio organized to explore the art and influence of Pietro Chiesa in 2004, little was known about the artist’s early period, spent far from his home town of Sagno in Ticino.

One of the strong points of the 2004 reappraisal was indeed its inclusion, beside already well-known works, of large-scale early paintings, three of which attracted particular attention:

The last of these is representative of the artist’s “Milanese period” and may well be regarded as a manifesto of the style, with its obvious affinity with the social realism generated by the new and unsettling urban and labour circumstances.

Throughout his Milanese period (so until 1915), Pietro Chiesa was closely associated with the milieu of “Umanitaria”, a philanthropic society dedicated to achieving social equality. Amongst his friends were many of the fathers of Italian and European Socialism (Turati, Kulisciov, Ada Negri…) and he was for many years close to the Majno family, especially to Ersilia Majno, to whom he always referred affectionately in his letters as “mammina”. He also helped the cause by teaching in the society’s evening courses beside his teacher Giuseppe Mentessi.

The work of Pietro Chiesa during his time in Milan, which included his illustrations for publications by his brother Franceso, emerged very clearly from the exhibition at Mendrisio, thanks also to the contributions Aurora Scotti and Irene Botta made to the catalogue.

I remember making a special trip to Venice to check on the state of conservation of Milanese suburbs, which had been purchased by the Civic Gallery of Modern Art at Ca’ Pesaro and was (probably still is) hung in a public building at the foot of the Rialto Bridge. I found it in a very delicate condition and this and its size were clearly going to present problems when it came to packing and transporting it to Mendrisio. The expense would be considerable but the exhibition could not do without the painting. It was at that moment that I thought of “Pro Venezia” and in no time at all I received an offer of generous support from the Foundation in the person of its President Alma Bacciarini.

The painting commanded attention, with its misty, dark, serious, sad, heroic atmosphere at the end of the first corridor in the Mendrisio Museum of Art; easily seen from a distance: one of the finest works of one of the most accomplished generations of artists from Ticino (Franzoni, Rossi, Berta, Feragutti-Visconti,…), for whom Milan was a mandatory point of reference. 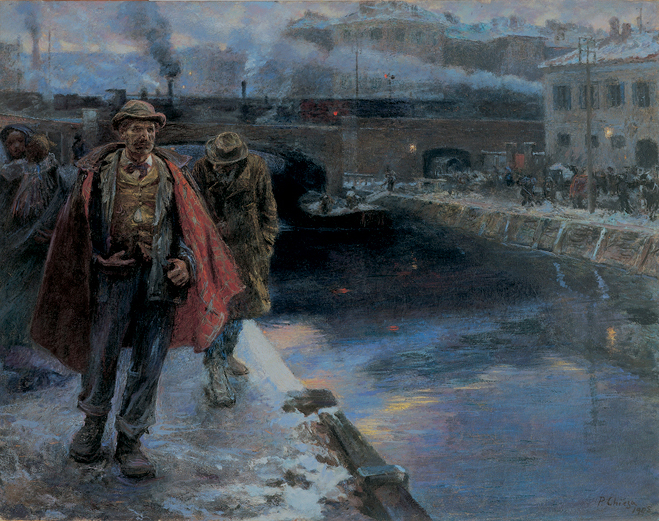