In the Autumn of 1998, the Giovanni Züst Cantonal Gallery of Rancate (Mendrisio) and the Municipal Gallery of Campione d’Italia decided to respond to the growing interest in the painting of the Lombard area in the 16 and 1700s and in the production of artists emigrating from the foothills of the Alps and the Swiss and Italian lakes by dedicating a monographic exhibition to the work of Paolo Pagani, with the intention of presenting the results of the latest studies devoted to rediscovery of the artist. The curators approached us with a request to finance the restoration of two important canvases hung in the “portego” of Palazzo Salvioni in Venice, so that they could be exhibited.

The two works depict dramatic episodes from the Bible involving the sons of Abraham: HAGAR AND ISHMAEL and THE SACRIFICE OF ISAAC.

In the first (Genesis, 21.9), the adolescent Ishmael, who was born of the union between Abraham and the slave Hagar, arouses the jealousy of the patriarch’s legitimate wife Sarah, who sees him as a rival to their young son Isaac; Ishmael and Hagar are cast out and seek refuge wandering in the desert. Their reserves of water are soon exhausted and Hagar resigns herself to the inevitable death of her son; but God, hearing the cries of the boy, sends an angel to lead them to a well. This saves their lives, thus enabling Ishmael to fulfill his destiny and father a great nation.

The second episode (Genesis, 22.1) tells of the incident in which Abraham accepts God’s injunction to offer Isaac, his only son and heir, as a sacrifice: having bound Isaac to an altar, Abraham is about to slit his son’s throat when God, satisfied with this demonstration of absolute obedience, sends an angel to stay the father’s hand and indicate a goat caught in nearby bushes, which duly replaces Isaac as the sacrificial victim.

The two oval paintings offer an excellent example of the anti-academic spirit of Pagani’s work: the confident, expansive style, the unrestrained composition and the intense expressiveness of gesture are all distinctive features the make Pagani one of the most original interpreters of Late Baroque style in Europe. 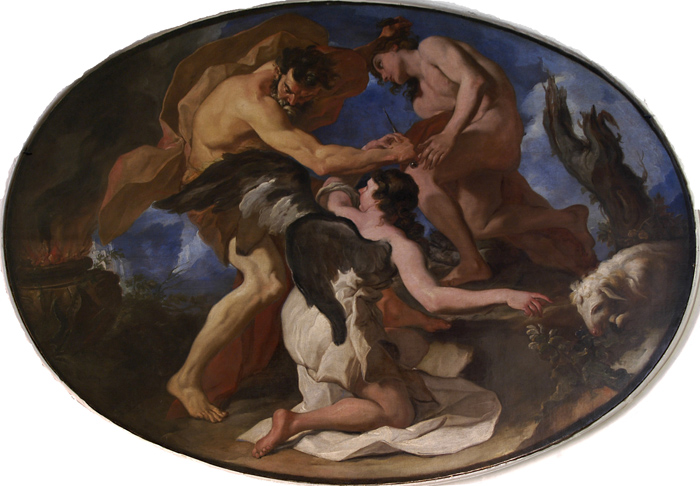 His biography, too, evokes an image of a strong personality with little respect for conventions. He was born in 1655 at Castello Valsolda in the Duchy of Milan, on the slopes rising from the northern branch of Lake Lugano. We know that he moved to Venice at the age of twelve but there is then no trace of his movements or training until suddenly and fleetingly he reappears as a printer, signing the publication of a number of etchings by the painter and engraver Giuseppe Diamantini in the 1670s. He then disappears from the records again until 1685, when he is registered for the first time as a member of the guild of painters, one of the many confraternities an artist or craftsman had to join if they wished to practise as a professional and which had to collect their members’ personal taxes on behalf of the Collegio della Milizia da Mar. The fact that there are practically no records for him for around twemty years suggests that Pagani must have been conducting an almost clandestine existence during that time: an artist without a licence and a tax evader to boot, he can only have worked to private commissions mainly from the emerging aristocracy, who were mostly resident on the mainland; unfortunately the only reliable evidence we have of his work in the lagoon area is the paintings he did for Palazzo Salvioni towards the end of this period.

Pagani married in 1686 and four years later he left for Central Europe with his wife and small son and a young pupil, Giovanni Antonio Pellegrini (1675-1741), who was later to enjoy considerable success at an international level. During his seven-year soujourn, Pagani found plenty of appreciative clients in Austria, Moravia and Poland and became a leading figure in an artistic movement that remained prominent until the mid-1700s. The fame of Venetian artists grew rapidly in the courts of the numerous major and minor states that flourished after the Peace of Westphalia, with specialists in landscapes, portraits, decorative arts and scenography admired and in great demand as “virtuosi”, much like the famous Italian opera singers then in vogue. Sought-after by kings and princes, these “itinerant painters”, almost all of whom were from the Venetian school, dominated the cultural scene north of the Alps for several decades.

On his return, he stopped in his home village and in 1696 and 1697 personally frescoed the entire ceiling of the Church of San Martino at his own expense, bequeathing his fellow villagers a sort of token of his accumulated professional experience. At the same time he painted a dramatic “Martyrdom of San Vitale” in the parish church of Chiasso. From then on his focus of interest shifted gradually towards Milan, where he met the Marquis Cesare Pagani (no relation), a noted collector and influential diplomat, who obtained a number of prestigious appointments and important contacts for the painter, including commissions for two large altarpieces for the Church of the Capucin friars in Chiusa d’Isarco (Bolzano) and for several paintings for the private collections of noble citizens. Pagani nevertheless found it difficult to establish himself and when his patron died in 1707 he found himself increasingly isolated and in difficult financial straits. Suffering severely from gall-stones, Pagani, “whose brilliant inventiveness and unrestrained manner made him a favourite of many Princes”, died in Milan on 5th May 1716.