On 21st September 1699 the death took place, at the age of 75, of the architect Giuseppe Sardi. Originally from Morcote, he was a leading figure in Venetian Baroque, responsible for a number of masterworks including the Mocenigo monument and the façade of the Church of S. Maria del Giglio (both restored with funds provided by the Swiss Pro Venezia Foundation).

In the will he signed in April 1698, Sardi expressed his wish to be buried under the floor of the Church of the Carmini, in a tomb he had designed himself. Sardi was very attached to this church, whose belltower he had designed twenty years before and of whose associated confraternity he was a member. 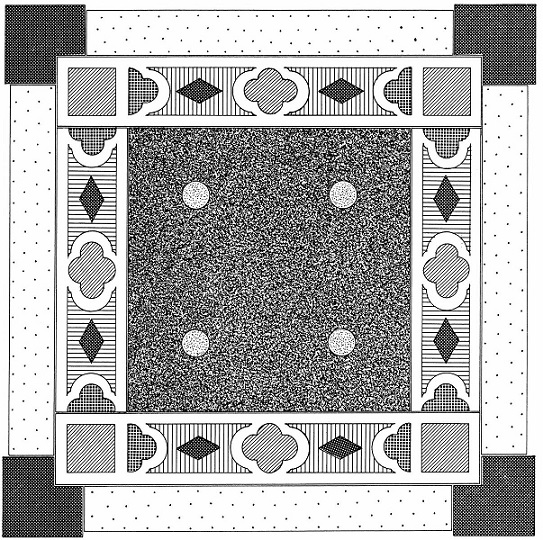 The cutting of the tombstone was supervised by Giuseppe’s son, in accordance with the now lost drawing attached to the will, so we can assume it faithfully complies with his father’s instructions. It lies in the nave, between the two side entrances. It is a simple 2 by 2 metre square shape, decorated with a band of coloured marble inlay and an inscription with the names of Giuseppe and his son Anton Giacomo in the upper part: "IOSEPH SARDI PATER ET ANTONIUS FILIUS MEDICUS C.V. /SIBI, SUISQUE POSTERIS PARAVERUNT", and with the date at the bottom "ANNO A CHRISTI SALUTE M. DCLXXXXVIII" (Giuseppe Sardi father, and his son Antonio, a doctor and citizen of Venice/ prepared [this tomb] for them and their descendants./A.D. 1698). 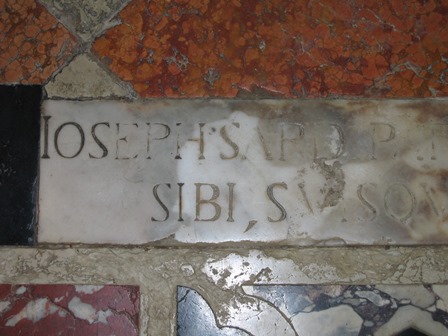 Anton Giacomo, who died on 15th January 1720, is also buried in the tomb. The feet of generations of congregations and visitors had gradually worn away the heraldic bearings of Giuseppe’s family and only the shield outline of Anton’s was still visible, with none of the detail. 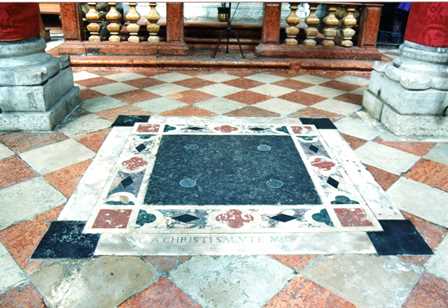 In 2010, on the occasion of its work on the main entrance of the church, the Swiss Pro Venezia Foundation decided to restore the tomb as well. Several segments of coloured marble were missing from the inlay work and the fixative was no longer effective. The whole was covered with layers of dust and wax and this, together with the phenomena of condensation and rising damp, had dulled the colours of the stones used. These were identified as: Nero Nube for the central slab, with four tondi in Grigio Bardiglio from Carrara; the intermediate bands have inserts of Greek Verde Antico, Breccia di Serravezza, Rosso di Francia and Nero Assoluto surrounded by Istrian stone, while the outer frame is in Carrara marble and the four corner stones are in Nero Assoluto.

Although considerably eroded and partially illegible, the inscription was only lightly retouched to make it easier to read. Finally, the outer edges of the tomb were marked to prevent further footfall and wear.

The restoration of the tomb was dedicated to the memory of Dr. Giorgio Sardi, the last descendant of the Morcote branch of the family and a member of the Association of Friends of the Swiss Pro Venezia Foundation.