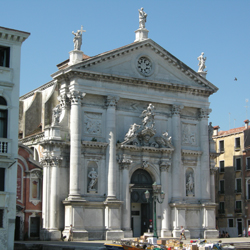 In its present form, the CHURCH OF SAN STAE (St. Eustace in Venetian dialect) is the result of a complete reconstruction of the previous building in 1678, the only known work of Giovanni Grassi. Thanks to a bequest of 20,000 ducats made by Doge Alvise II Mocenigo, however, the magnificent façade on the Grand Canal, incorporating the work of numerous sculptors, was added in 1709 by Domenico Rossi (Morcote, 1657 – Venice 1737), whose design was preferred over ten other submissions.
Leggi →
1985 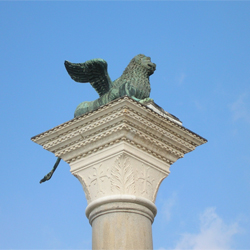 The grey granite COLUMN OF ST. MARK stands in one of most magical places in Venice, overlooking the lagoon at the edge of the Piazzetta San Marco adjoining St. Mark’s Square; it is one of the great symbols of Venice, emblematic of the approach to the city from the sea. With the adjacent Column of St. Theodore in red granite, it was brought to Venice from the East (though their exact origins are unknown) around the XII century.
Leggi →
1987

Paintings by Tintoretto and Fumiani

The Church of San Rocco contains two large canvases restored by the Swiss Pro Venezia Foundation in 1987: SAINT ROCH CAPTURED AT THE BATTLE OF MONTPELLIER and CHRIST DRIVING THE MERCHANTS FROM THE TEMPLE.
Leggi →
1996 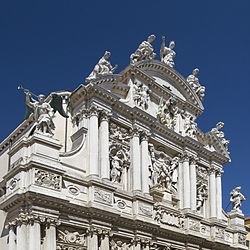 The restoration of the façade designed by Giuseppe Sardi of Morcote (1624 –1699) The seventeenth century saw several examples of what have been called “private uses of church façades” or “lay façades”, and the return of commemorative façades, all of which exerted a significant influence on the redefinition of urban space in Venice.
Leggi →
1997 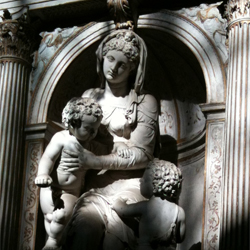 In 1997 the Foundation financed the restoration of the second altar against the right side wall of the Church of San Sebastiano in Dorsoduro. The altar dates from the mid-XVI century and, as an inscription on the wall notes, was commissioned by the famous orator and jurist Melio da Cortona in memory of an ancestor of the same name who was a heroic commander of the Venetian infantry who died from a wound sustained in battle against the army of Ferrara.
Leggi →
1998 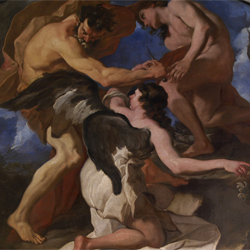 In the Autumn of 1998, the Giovanni Züst Cantonal Gallery of Rancate (Mendrisio) and the Municipal Gallery of Campione d’Italia decided to respond to the growing interest in the painting of the Lombard area in the 16 and 1700s and in the production of artists emigrating from the foothills of the Alps and the Swiss and Italian lakes by dedicating a monographic exhibition to the work of Paolo Pagani, with the intention of presenting the results of the latest studies devoted to rediscovery of the artist. The curators approached us with a request to finance the restoration of two important canvases hung in the “portego” of Palazzo Salvioni in Venice, so that they could be exhibited.
Leggi →
1998 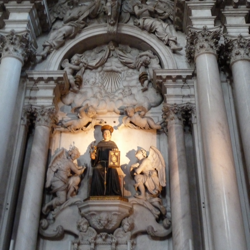 Altar to Sant'Antonio in the Frari

Of the seventeen monumental altars in the majestic Basilica of Santa Maria Gloriosa dei Frari, the first in the right aisle of the church is dedicated to Saint Anthony of Padua, and in 1998 it was scheduled for ordinary maintenance attention. But as soon as the experts set hands on it they realized that much more radical action was needed to solve serious structural problems. The parish did not have sufficient resources to meet the considerable increase in costs and was unable in the short term to find extra funds. So our Foundation stepped in and offered to supplement the money available so that the urgent work could be completed by the end of the year. Indeed, given that two architects from Ticino were involved in the original construction of the monument it would have been wholly unreasonable for us to have refused an opportunity that so perfectly corresponded to the Foundation’s policy of concentrating its support on the conservation of works by artists born in or closely associated with our national territory.
Leggi →
2002 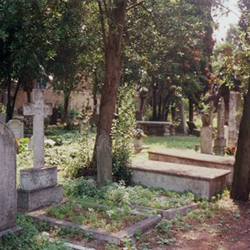 For over a century, the Protestant section of the Civic Cemetery, the REPARTO EVANGELICO, has been the final resting place of famous foreign guests of Venice; the many nationalities represented include British, German, Swiss, Swedish, Dutch, American, French, Danish, Russian, Austrian, Italian, … and the deceased include consuls (four of them Swiss), admirals and writers, as well as ordinary citizens.
Leggi →
2004 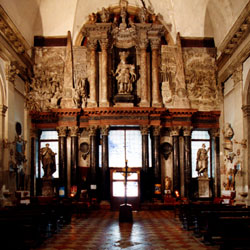 Far from the most crowded tourist routes in Venice, half way along a canal that leads to the northern edge of the city, stands the Church of San Lazzaro dei Mendicanti. The church is easy to miss because its façade forms part of the outer wall of the city’s main hospital, but a surprise awaits anyone who has the patience to find and enter it: the funeral monument to Alvise Mocenigo, an early work by Giuseppe Sardi (1624-1699), the renowned architect whose family came from Morcote.
Leggi →
2004 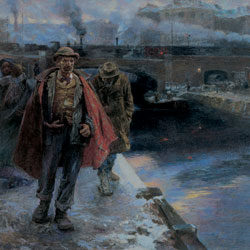 Before the great retrospective that the Art Museum in Mendrisio organized to explore the art and influence of Pietro Chiesa in 2004, little was known about the artist’s early period, spent far from his home town of Sagno in Ticino.
Leggi →
2009 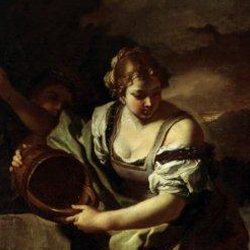 2009 saw the conclusion of work on the restoration of two important paintings by Francesco Solimena belonging to the collection of the Accademia Galleries. Our Pro Venezia Foundation financed the restoration, which was carried out in Superintendency’s multidisciplinary laboratories sited in the historic surroundings of the former Abbazia della Misericordia. We were thus able to follow the progress of the work in detail. Before being rehung in their usual place, the paintings were exhibited in the Accademia itself in the context of a major cultural event, a fact which, albeit indirectly, was a tellingly appreciative acknowledgment of our involvement.
Leggi →
2010 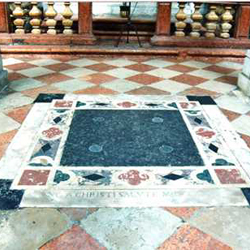 Tomb of Giuseppe Sardi (Venice, 1624 –1699) and his son Anton Giacomo (Venice, 1644 –1720). On 21st September 1699 the death took place, at the age of 75, of the architect Giuseppe Sardi. Originally from Morcote, he was a leading figure in Venetian Baroque, responsible for a number of masterworks including the Mocenigo monument and the façade of the Church of S. Maria del Giglio (both restored with funds provided by the Swiss Pro Venezia Foundation).
Leggi →
2010 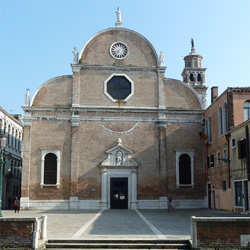 Vistors exploring Venice will sooner or later come to the lively Campo S. Margherita and as they leave the square are sure to be intrigued by the side entrance to the Church of S. Maria del Carmelo (commonly known as the Carmini). The entrance is covered by a stone and brick porch called a protiro, a surprisingly bold construction decorated with friezes and patere depicting a fascinating bestiary. A few steps further takes one to the front of the church and a quite different register, a sober, Codussi-inspired, open-brick façade that was once plastered, its decoration limited to a rose window, five statues crowning the cornice and the monumental, apparently Renaissance entrance. This portal (in Istrian stone and comprising two semi-columns and corner pilasters of an elegant Ionic order on tall bases, supporting a dentilled entablature and a fascia in red marble – the only example of different colour or material in the whole – and a niche with a split tympanum) has a full-relief statue of the Madonna and Child at the centre, surmounted by a vase (though there were once three statues at the top of the entrance, and the statue of the Madonna is not in its original position).
Leggi →